FORCE OF WORDS:
THE LOGIC OF TERRORIST THREATS

This book is the first detailed study of the role of threats in terrorism. Threats and violence are the two halves of terrorists’ coercive tool kit: terrorists carry out violence to lend credibility to their future threats; threats force governments and civilians to give up political concessions. Most terrorism literature focuses on the violent half of terrorists’ tool kit, but threats are how terrorists translate physical power into political results.

Force of Words is a groundbreaking contribution to the fields of terrorism studies and security studies. It shows how terrorists use threats to achieve major strategic goals such as policy concessions and social control. It also shows how terrorists employ threats for tactical purposes, drawing security forces into traps, disrupting economic life, and warning civilians away from danger. Terrorists use threats to tailor the harm from each attack so that their desired political message is sent. Drawing on rich interview data, quantitative evidence, and case studies of the IRA, ETA, the Tamil Tigers, Shining Path, the Túpac Amaru Revolutionary Movement, Boko Haram, the Afghan Taliban, and ISIL, Force of Words offers practical guidance for interpreting terrorists’ threats and assessing their credibility. 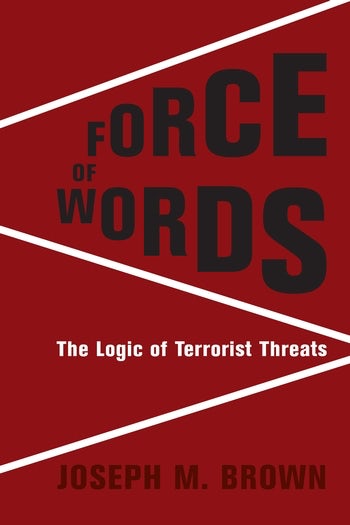 Read the introduction to Force Of Words to the left. For the Google Books preview, please click here.

"Brown offers the first comprehensive scholarly study of how terrorists use words to coerce, warn, inspire fear, legitimate, negotiate, and ultimately change the perceptions and behavior of governments and the general public. His rich case studies combine impressive fieldwork and sophisticated quantitative analysis to skillfully explain the threats of some of the world’s most prominent terrorist organizations."

"Terrorism has always been about more than violence. It involves projecting the constant threat of that violence. In this superb book, Brown explores the warnings, pledges, hoaxes, and bluffs that prove terrorists know just how much power and control lie in their use of language. Force of Words is a remarkable, innovative resource for students and practitioners of counterterrorism worldwide."

John Horgan author of The Psychology of Terrorism